When Charles and Donna Cooley retired from Southern Utah University in 1995, they began producing and giving away small animal cut-outs.  Children found them so appealing that they began regular deliveries 250 miles north to Primary Children’s Medical Center in Salt Lake City and soon, says Charles, “We got more hugs there than we did at a family reunion.”

A free pickup truck load of hardwood strips inspired Charles to design and make small cars and trucks, painted by Donna, which were warmly welcomed in Salt Lake City as well at Shriner’s Hospital and the Humanitarian Center, a charitable arm of the church of Jesus Christ of Latter-Day Saints (LDS) where the Cooley’s learned there were 500 million children in the world without toys.

“We couldn’t make a drop in the bucket for a need like that, ” said Charles. But he was told “One toy may be only a drop in the bucket of the world’s needs, but it’s a big drop for the child who gets it.”  That changed the Cooley’s hobby into a full-time labor of love and inspired a motto:  “We may not be able to make a toy for every child in the world who needs one, but we’re going to try.”

While cutting out more cars and trucks on a chilly morning in November 1996, Charles was inspired by the smiling faces of children who got their toys and their operation had a name, The Happy Factory.

Soon volunteer helpers signed on, production increased and Happy Factory toys began winning smiles from thousands more needy children all over the world and in the US, in hospitals, Family shelters, churches, schools, Native American Organizations, Foundations, Medical Clinics, Crisis Centers, Head Start branches, orphanages, and from the often forgotten young victims of natural disasters. Many individuals have even hand-carried toys to places all around the world.

When toy steam shovels on which a child can sit and manipulate the bucket were added to production, seriously disabled children were stimulated to do all sorts of things previously thought to be beyond their capability.  So far, over 2,610 have been delivered to children all over the world, and in many cases and places “steam shovel therapy” is the only kind available. 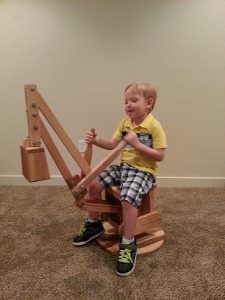 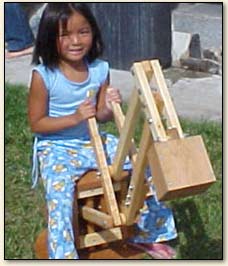 The impact of steam shovels and simple little toys on children who never had one has frequently been startling, as if a light had suddenly turned on in darkened little heads.  To their delight, the Cooley’s discovered their toys were often tools that helped rejuvenate minds.

To date, over 1,600,000 Happy Factory toys have been given to more than 600 different organizations, groups and people in 125 countries. No Happy Factory worker makes a dime and the gifting is still gathering momentum.

Thank you for considering The Happy Factory as a beneficiary of your time, effort and hard-earned money. You may also wish to volunteer to work at the Happy Factory, located in beautiful Cedar City, UT.

You can make a child’s life brighter in many ways.