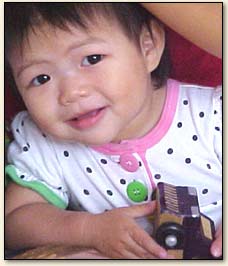 Does a toy really make a difference to a child?

One day Charles was talking with a friend, Les Jones, who is the head of the psychology department at Southern Utah University. He asked if a toy made any difference to a child. He didn’t have time to explain the answer right then, but send Charles a printed explanation later. Here are just a couple of paragraphs of what he sent:

“Imagination.”
Children that experience emotional trauma often learn to suppress their pain and fear by turning off their minds. They learn to stop thinking. The common sights and sounds of their world stimulate images of despair. The important elements of their life are beyond their control. They have no power. they learn that they are helpless. They learn to turn off their imagination and escape into a stupor of nothingness. Toys stimulate a sense of power.

When you have a toy you are in control. you have power. The more simple the toy the more power and control you have. Many modern toys are too complex. They occupy our mind instead of stimulating our imagination.

The best toys are toys that represent love – personal toys not community toys. Simple toys that stimulate the imagination. Toys that last a life time and beyond.

Many of these children in orphanages do live in the land of nothing, the poorest of the poor, the lowest level of poverty, many do not even have a name. Food, clothing and medicine is usually not enough to help them escape from this stupor of nothingness. We must also deal with their heads and their hearts, give them a feeling of power and control.

Our toys give them this feeling. It give them a feeling of ownership, pride, love, hope, and self esteem. The toys trigger the imagination and help start the learning process.

During the year 2000, The Happy Factory entered a pilot program with the charities division of the Church of Jesus Christ of Latter Day Saints. We supplied 1800 toys a month that were sent through the humanitarian missionary couples that were serving, mostly in eastern Europe and Africa, where they were finding so many orphanages. On February 20, 2001, Charles and Donna had a meeting in the office of Garry Flake, the director of humanitarian service for the LDS Church. He invited two of the area directors who go all over the world to coordinate humanitarian projects. They told us some very interesting things.

They stated there are over 500 million children living in poverty. 500 million! Half a billion! Many of these children in orphanages have very little clothing. Many are naked. It’s common at meal time to be served out of a common rusty pot, which they reach into with their hands because they have no utensils. Some of the orphanages have a few wooded bunks that the older children sleep on. The younger just sleep on the floor. It is not possible for the human mind to imagine the depths of poverty in which so many of these little children live. They told us you have to be there and see it, smell it, and feel it to believe it.

Through this pilot program we have learned that The Happy Factory toys in most cases are better than the medicine. The children hold a toy, they sleep with it, the love it. It’s like a security blanket. In most cases it’s the first thing the child has ever owned. One of the area managers said he had witnessed the magic of a toy in the hands of a child.

We thank the lord that we have been given the opportunity to give many children that flower for the soul, to help jump start their imagination to give them a feeling of power and control, to let them feel the love of another human hand.