Representing the MDRT Foundation, Rex P. Shipp, CLU, ChFC, presented this grant to The Happy Factory on 04-08-2015 at the Cedar City facility.

The Happy Factory is a 501 (c) 3, non-profit organization devoted to making quality, but simple toys to be distributed to underprivileged and physically challenged children here and around the world in an effort to improve their quality of life. Many of these children live in the worst of poverty.  These toys are made from donated scrap hardwood with entirely donated labor, there is no payroll.

The Happy Factory goal is to provide that critical first step in changing lives with their simple toys. Along with stimulating the young minds and imaginations, the toys help generate self-esteem and create a trust between the child and the people dedicated to helping them improve their lives day to day. Their special wooden steam shovels help handicapped and challenged children develop muscle as well as mental performance and coordination. Last, and most importantly, they all produce smiles and good feelings.

The MDRT Foundation was created in 1959 to provide MDRT members with a means to give back to their communities. Since its inception, the Foundation has donated more than $29 million in more than 70 countries throughout the world and in all 50 U.S. states. These funds were raised by MDRT members and industry partners. For more information, visit mdrtfoundation.org.

The MDRT Foundation is the philanthropic arm of the Million Dollar Round Table, The Premier Association of Financial Professionals®. MDRT is an international, independent association of nearly 42,000 of the world’s best life insurance and financial services professionals from more than 80 countries and territories. MDRT members demonstrate exceptional product knowledge, strict ethical conduct and outstanding client service. MDRT membership is recognized internationally as the standard of sales excellence in the life insurance and financial services business. For more information, visit mdrt.org.

The Happy Factory at the Iron County Fair Parade

The Happy Factory was pleased to participate in the Iron County Fair Parade this year. The theme of our float was “American’s Volunteers”. Jack Hayes manages to put together a fine array of flags and signs for the float. Thanks Jack! We had a great turnout and everyone had a wonderful time. The driver managed to scare everyone at the end by barely missing the low hanging power lines with our large American flag that was standing straight up. The flag was one that flew over the White House. That would have been a shocker!

Thanks for a great day Happy Factory Volunteers! 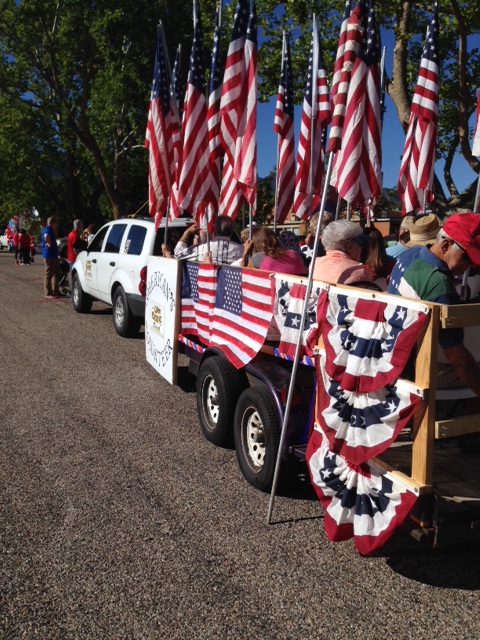 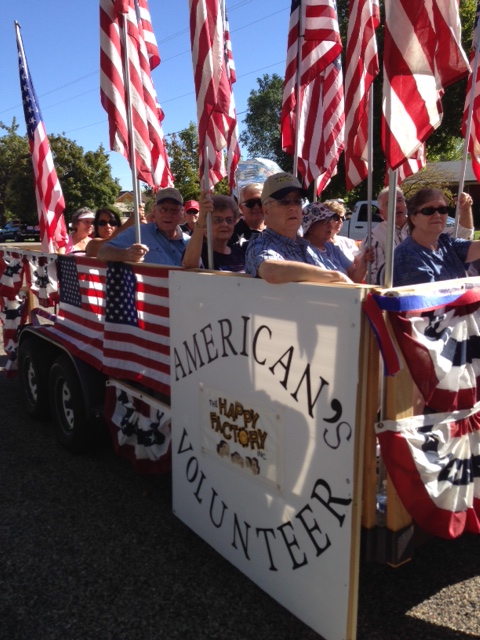 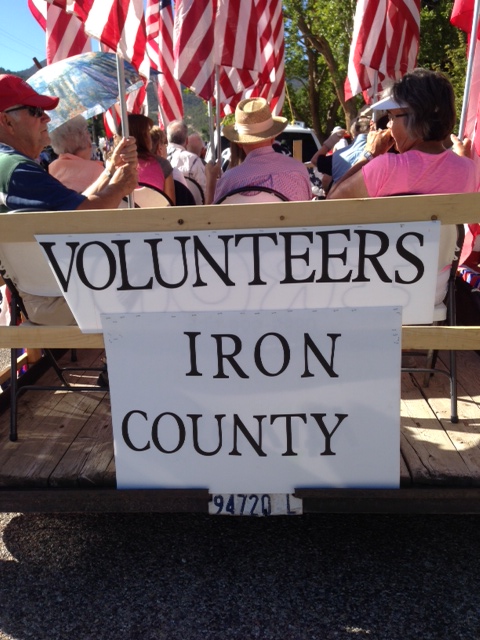 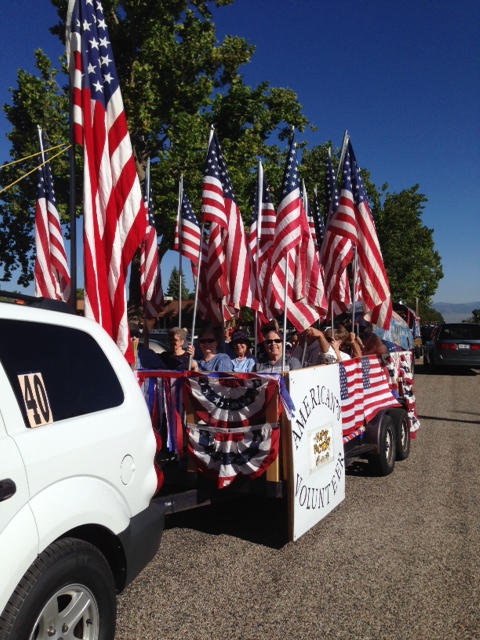 America watches Cedar City Around the nation, people tune in to ‘Three Wishes’

CEDAR CITY – While the lights in the Southern Utah University Sharwan Smith Center ballroom were off, there was sniffling and sobs from those viewing a large screen set-up there.

When the lights flipped on, men, women and children could be seen wiping away tears.

The cause was a community pajama party, sponsored by the Cedar City Area Chamber of Commerce and the Cedar City & Brian Head Tourism Bureau, that brought more than 100 people together to view the NBC-Universal reality show “Three Wishes” that featured Cedar City.

“I’ve been volunteering at The Happy Factory, in fact I volunteered there today with two of my five children, and to see their faces as they watched the show and learned where the toys they made were going was wonderful,” said Allison Sproul. “They just stared at the screen and it was neat.”

The Happy Factory, a non-profit wooden toy company, was granted one of three wishes by the television series. The Cedar City Fire Department and Nicole Rasmussen were the other recipients. Filming took place in August for the segment that aired Friday.

When the host of the show, Amy Grant, announced the segment was in Cedar City, the crowd broke out in thunderous applause and cheers, followed by an array of emotions right up until the running of credits.

The plight of Rasmussen – a mother who’d lost her sight from a bacterial infection in her brain – instantly turned the joviality into compassion. The show showed her climbing a rock surface and crossing busy downtown Main Street. Her wish was to take her young daughter, Payton, to a park to play in her own neighborhood.

When she was granted the play park and read the Braille lettering that revealed it had been named after her daughter, she shed tears of gratitude, which were shared with those at the party via the TV screen.

That crying was soon replaced with laughter when Donna Cooley of the Happy Factory gently reminded Grant to “hold tight” as she pressed a wooden truck against a sander. The music artist responded, “I will,” only to have the toy fling up and narrowly miss her head.

However, tears welled again when Charlie Cooley and his wife received a new workshop in Salt Lake City complete with $50,000 in shipping costs paid for by Federal Express. They also received the chance to meet some Nicaraguan children who received their toys.

A new box truck valued at $40,000 was also donated by International to the Factory and is on display in the parking lot at SUU. It’s appearance was made possible from Mark Kohler, who drove the vehicle from Las Vegas.

“NBC granted wishes that will enable all the recipients to keep perpetuating love and give gifts like they’ve been doing and want to continue doing,” said Kohler.

When a $1.6 million 100-foot aerial platform truck and a 4,000 gallon water tanker for the fire department rolled in across the screen from a wish made by 9-year old Michaela Pickering, Yvonne Wood beamed.

The little girl credited the fire department for saving her life when she put the skills taught to her to use when she escaped the burning home of a friend. That unselfish example is why Wood’s company, Liberty Mutual, followed suit and donated the new vehicles, she said.

“I am so proud to be a part of this whole thing, that my company would fork out a large amount of money to the Cedar City Fire Department, that is so deserving,” said Wood. “This event, the show and the people here, prove just how special Cedar City is.”

NBC renewed the unscripted series also on Friday for six more episodes, bringing the total number of episodes ordered to sixteen. The announcement was made by Kevin Reilly, president of NBC Entertainment.

CEDAR CITY — Without even knowing the wish he was granted, Happy Factory co-founder Charles Cooley was speechless about the fact that the nationally televised show “Three Wishes” would promote his non-profit organization.

“The whole Happy Factory is overwhelmed,” Cooley said. “I don’t sleep at nights — I’m still trying to imagine what’s going on and what will happen.”

Cooley and his wife, Donna, did not make the wish that initially connected them to the show, but once the communication started rolling, they did make another wish — that the organization would have enough money for its annual budget, $60,000.

The Happy Factory makes wooden toys and donates them to children throughout the world. All of the materials, equipment, labor and shipping is donated, but a large part of the company’s annual budget — $35,000 — is strictly for toy wheels and axles.

“Three Wishes” hostess Amy Grant spent Tuesday morning at the Happy Factory, and as she learned about the process, she even made her own toy. But when it was time for the wish to be revealed, the public was excused, and the wish has yet to be made public.

Grant spent time talking to Donna Cooley about how the Cooleys never travel to deliver any of the toys, and while one might speculate a trip is in store, there are no definite answers as to what was gifted.

Happy Factory board member LynAnn Ellsworth, who was volunteering, echoed Charles Cooley’s wish, saying the budget is crucial to the organization.

“Cedar City is so generous, but this is a worldwide humanitarian effort. It’s hard for Cedar City to support a world wide effort,” she said.

Ellsworth said the exposure of The Happy Factory alone is a wish come true.

“This TV show will give us national exposure, which we hope with time will turn into national support so the Happy Factory will never have to stop making toys,” she said.

As all this was going on, there were cameras and crews moving around, but it truly was unscripted television. There were no cue cards, no teleprompters, and the only time the camera was turned off was if something conflicted with the shot.

Executive Producer Andrew Glassman watched monitors in another room, and even his stage cues were kept to a minimum.

“I don’t think I’ve ever known a group of people as nice as these here,” Charles Cooley said. “They must produce a good show for the kind of people they are.”