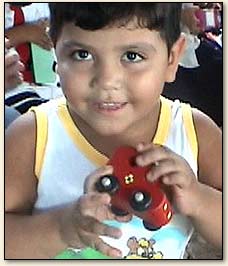 Anyone can make extra ordinary thing happen, but you have to do it. Isn’t it amazing what can happen  when people work together  for a common cause.

Sometimes living in this land of plenty, we forget forget those who live in the land of nothing – especially the little children. Charles and Donna Cooley have not forgotten. This is Charles’ story of how the Happy Factory came to be:

“We’re so grateful we’ve been given this opportunity to serve the little children.

We had a stockpile of about 150 toys at a time when we had to make a trip to Salt Lake City. Donna served in our church as stake Relief Society president [a group of women in the LDS church dedicated to service] and wanted to stop by the Primary Children’s Medical Center to get some ideas for quilts. I suggested we take the toys up to see if they could use them. Because of liability and other reasons we weren’t even sure if they would take them.

We took one box in and the front desk directed us to the foundation where we met a very nice lady (Marie Hendrickson.) She asked if she could help us. We said we had some toys and wondered if they could use them. She said let’s see and opened the box and said “Oh MY! We could certainly use them. Thank you very much.”

I said do you have a cart? We have four more boxes down in the car. She said yes, we’ll find a cart. we went down to the parking lot and loaded the other boxed and turned in to get in the car to leave and Marie said, “just a minute,” and turned around. There were tears running down her cheeks and she said, “I’ve have got to have a hug.” Every time we went back to deliver toys the staff would come out of their offices and even the woodwork and give us a hug. I told Donna I think we get more hugs here than we do at a family reunion; and she said “yes, and I think they’re more sincere.” I think we made the commitment on that first hug that we were going to make toys for children in our retirement.

Then we heard about the Shriner’s Hospital and found that they needed toys. About this time Donna heard about the Sort Center (a humanitarian center) and said the next time we went to Salt Lake City, she would like to get some guidelines for Relief Society projects.

So, we went to Salt Lake and visited the sort center. We met a man in the lobby, his name was Robert Workman. We explained why we were there. He asked if we had ever been there before and if we’d like to take a tour. We were so amazed at the size of that vast complex and all the clothing and quilts and books and medical equipment. We ended up on the second floor and I noticed a few wooden toys on the counter. I asked Mr. Workman if they needed more. “Oh Mr. Cooley, do you realize there are millions of children who have never had a toy.”

Extra Ordinary Whirlwind
August 1999: we received a phone call from Swiss Army Brand in Connecticut telling us that we’d been selected to receive an award. Donna thought it was a telemarketing call and almost hung up. But she was assured it was legitimate and wondered if we could be in Salt Lake City on a certain day in August. We looked in our planner and were scheduled in Salt Lake City on that date.

We arrived in Salt Lake City, incredibly it turned out to be the day after a rare tornado hit downtown Salt Lake City. We didn’t meet them in their tent by the Salt Palace as planned because it had been destroyed by the tornado. They had us meet in the parking lot at the State Capitol Building. We were so surprised because the president and CEO of Swiss Army Brand was there to present this award. He presented us with watches, Victronox all purpose knives with all the blades and tools. But these were sterling silver and had our names engraved on it.

Then he read us the award and it stated: “Ordinary People Doing Extra Ordinary Things.” There was a photographer there from the tribune. the next day there was an article and picture in the Salt Lake Tribune. A few months later, we were in Lloyd Pendleton’s office at the church office building. He had seen the article and congratulated us on receiving it. I told him that I had never been very comfortable with that award. He asked why? I said because it stated ordinary people doing extra ordinary things. Now, I’ve lived with me every day of my life and I know that I have never done anything extra ordinary.

He disagreed, “You and Donna made a commitment and you did it. We all have good intentions but the ones that do it are extra ordinary and what happens when you do it, it opens the door so the LORD can come in and make the extra ordinary things happen.”

The Wheels Start Turning
A little over three years later we had volunteers helping us and were starting to produce quite a few toys. I was a little concerned about our liability so I talked to an attorney friend. He didn’t think we had much exposure because we didn’t sell anything but, we should probably incorporate for protection. I didn’t think we could afford that. He offered his services incorporating the Happy Factory as a non-profit charitable organization. He recruited a CPA friend to get us 501C3 rating with the IRS and another attorney friend filed for our registered trademark. .All at no cost to us. And Happy Factory became more than a dream.

We make toys from hard wood that is actually the scarp wood from cabinet shops. We now have headquarters in Cedar and eighteen branches in seven western states, and one in Campo Grande, Brazil. All the branches pay their own overhead. We pay no salaries. We do provide the wheels and axle pegs for the branches. This year we estimate we’ll need 300,000 wheels. We have had more than 82,000 service hours donated.

We have kindergarten children through senior citizens. We have used inmates for both youth and adult correctional facilities. We have delivered more than 200,000 toys that have gone all over the world. We’re now in the process of delivering 250 steam shovels to all the class rooms in the state of Utah that have children at risk programs. These are the little pre-school children that have mental or physical handicaps.

My Cup Runneth Over
The other day someone asked me, don’t you get paid for all the time you put in at the Happy Factory. I thought for a minute and realized that we certainly do. We know what David meant in the 23rd psalms when he said “my cup runneth over”.

We thank the lord that we have been given the opportunity to give many children a flower for the soul, to help jump start their imagination to give them a feeling of power and control, to let them feel the love of another human hand.

Anyone can make extra ordinary things happen, but you have to do it. Isn’t it amazing what can happen when people work together for a common cause. That’s called a Happy Factory.

Thank You Very Much,
Charles Cooley