We have wonderful stories that have followed our toys all over the world. Here are some of them !

Thank you ever so much for the wonderful steam shovel!!    Noah absolutely loves it!!  It has been such a great help to him to work not only his arms, but also his hand/eye coordination.  I have already had comments from his therapists at school.  We, as a family, are so grateful to all of you at the Happy Factory.  Thank you for putting smiles on children’s faces and for your particular attention to children with special needs.  We applaud your efforts and are deeply humbled to have personally benefited from them.   Thank you so much!!!

Our Story (From Walk with Angels)

Our angel Noah joined our family on May 21, 2009 in Columbia, South

Carolina.  Soon after he was born he stopped breathing and needed to be resuscitated before being whisked away to the NICU for observation.  The next morning they discovered he had a significant heart murmur due to several heart defects.  During the next year he had significant developmental delays and was in and out of the hospital with all sorts of medical issues.  At age 1 he underwent open-heart surgery to repair the heart defects.  The doctors hoped he would be able to catch-up developmentally.  As the weeks went by, there was no noticeable difference and the doctors became concerned there was something more.  At 15 months he was diagnosed with an extremely rare chromosomal abnormality; so rare that there is no name for his condition, only a long medical term, and as far as we know he is the only one to have it on record.  Due to the rarity of his condition there is no prognosis and we take everything one day at a time.

He is the absolute joy of our lives!  He is the happiest child and one cannot be around him without just falling completely in love.  He is the most patient child as he endures his trials and is so mild-mannered.  We are so blessed to have him in our family and in our home!

Earlier this year Michelle contacted the Happy Factory about getting some of the toys like Noah had received in the hospital to pass out at her “Walk with Angels” by the United Angels Foundation. After she had distributed the toys, she came in personally to thanks us for the toys and to deliver a thank you note and brought her son Noah with her.

It does a heart good to see the fruits of your labor change lives. We hope that through continued use of the steam shovel, and the love and support of his family and friends, Noah will keep making great progress in developing his mind and body. We are blessed to be a part of Noah’s life. 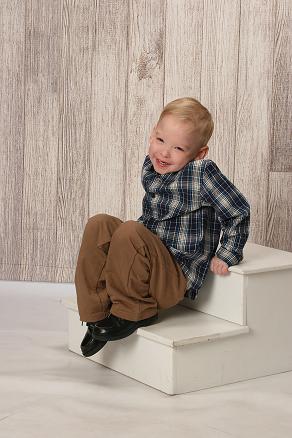 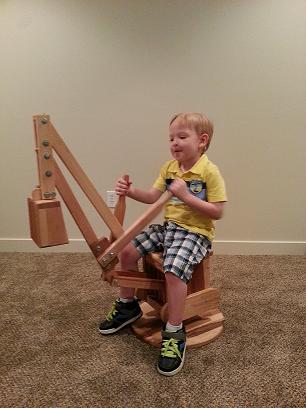 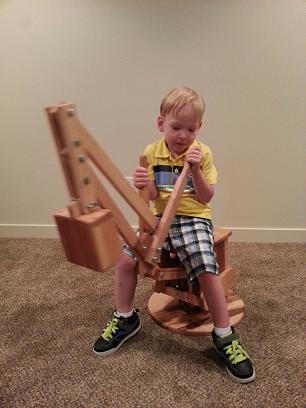 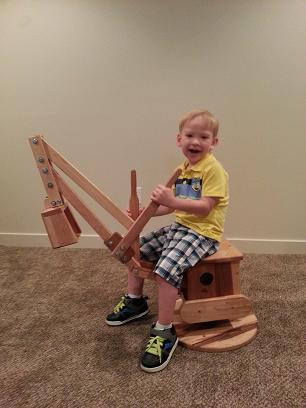 It has been an honor and a pleasure to have volunteered at the Happy Factory for the past 3 years, but my greatest joy was getting to know its founder, Charles Cooley. Charlie really put the “Happy” in The Happy Factory.

There was never a day that he didn’t declare that he was feeling “marvelous”, even though he was going through a time of great pain and suffering. He used to come into the front office and sit in his big chair and tell me the many stories of The Happy Factory, his eyes filling with tears.

Maybe I should have paid more attention to my computer duties and getting the website updated, but I never tired of Charlie’s welcome interruptions, reminding me of his love and dedication to The Happy Factory.

Charlie, I hope that somehow you know just how much I miss those stories.

Hi I just wanted to thank you for the darling little car you donate to Haiti. I went there on a medical mission and my Young womans group made dolls to take to them. I was feeling bad about what I could give to the little boys. In a matter a few hour my friend Jean Arnott fixed the problem thanks to you. Here are a few pictures to share with you. For more information about my trip log on to Julee-makingabrighterday.blogspot.com . THanks so much for your generous donation.

Today we went and visited a Roma community near the Hungarian border. We were touched by the extremely humble circumstances that the Roma live in. They are indeed the hiss and the byword of the European nations. We see them daily outside of our apartment building, digging in the dumpsters. But until today we had not seen them in their own surroundings. Our partner organization, Caritas (the relief arm of the Catholic Church) took us to a preschool that they have set up to help the children learn Croatian before they enter into the Croatian school system. The Roma people have their own language and do not learn or make any effort to learn the language of whatever country they are in. This makes it very difficult or almost impossible for the children to succeed in school. The Caritas organization has reached out a hand to correct this problem in this community. We went to investigate the possibility of doing a project with them.

We took some of the darling cars that you so graciously sent to us.

WHAT A HIT!!!! They were so excited to each have a little car placed in their hands and you should have seen their faces when the teacher told them they were not for the school, but for them to take home! We feel so fortunate to have been able to be the ones to give these special little cars to the children. Our hearts were touched and the children will cherish their new toys with great enthusiasm! They couldn’t wait to have the teacher let them get down off their chairs to play with them on the floor!

Please accept our grateful thanks and love for the great work that you and your wonderful volunteers do. Here are a few pictures for you. If you need them in a different format, let me know and I will send hard copies, attachments, whatever you would like. 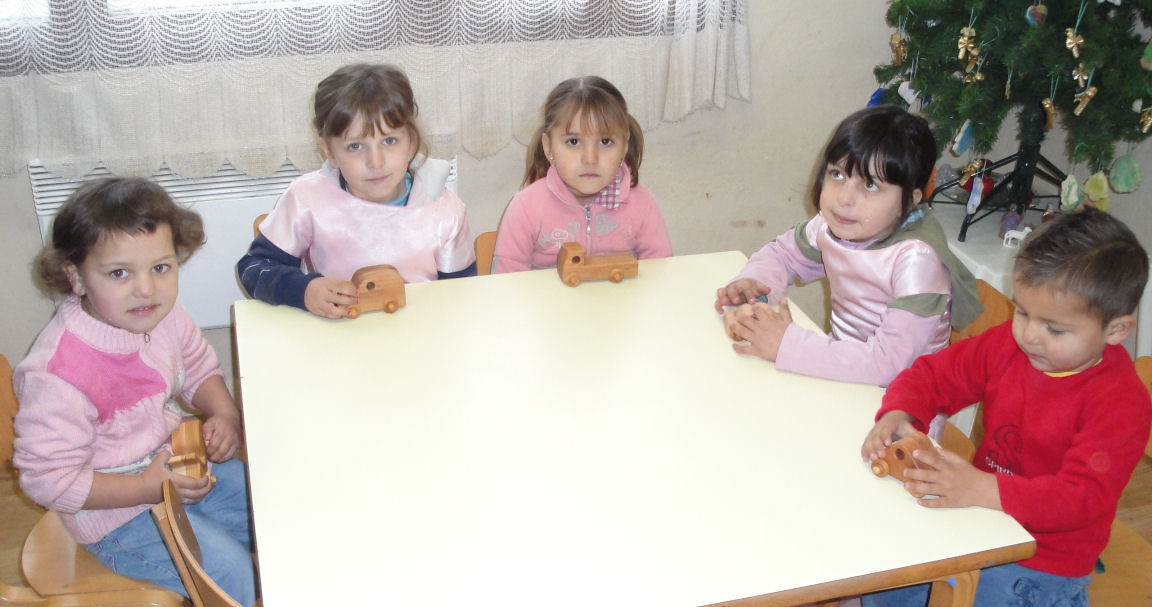 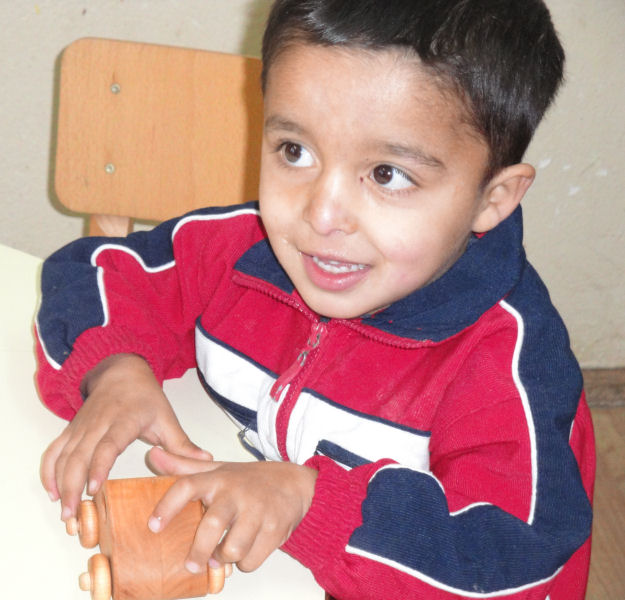 Here are some of our pictures in Guyana, South America, giving away

toys; what joy they bring into the lives of these Amerindians. We

loved having them and being able to share; thank you again for sending

them to us. As we have finished our mission now, these moments have

become some of our favorites. 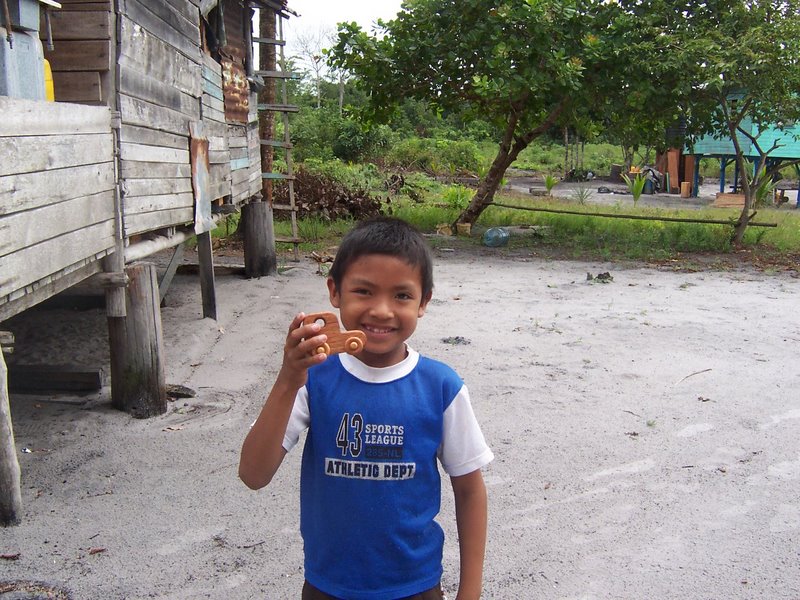 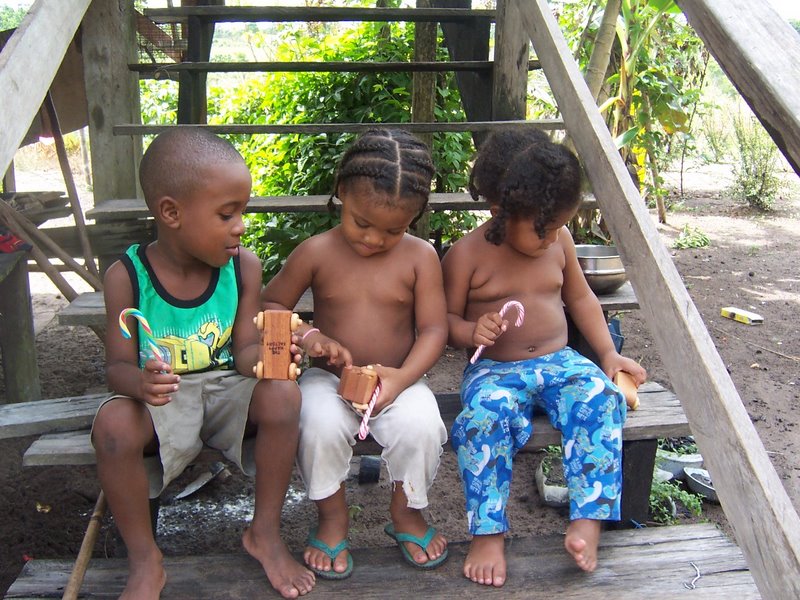 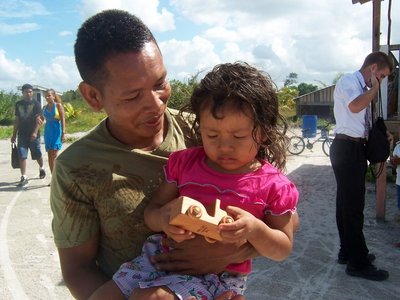 Dear Happy Factory,
You may or may not remember me but I most certainly remenber you and the work you do. As a student at SUU from 1995-96 and from 1998-2002 I spent many hours in your workshop sitting at a bandsaw cutting out toys and recruiting other college students to get involved. I was also the president of the institute there and we painted many of your toys.
Now I find myself in a different situation and would love to be of help again. I am now a doctor in the US Navy. I am currently at Fort Dix in New Jersey preparing to deploy in one month to Afghanistan. My primary responsibility will be to take care of the US and NATO forces who are injured in combat. However, my secondary responsibilty will be to take care of the local national population in the area in which I will be serving who may be injured or sick. At the current time that population includes many children. I don’t know how to go about doing it just yet but I would love to be able to take some of the toys you are making with me to Afghanistan and give those children that same opportunity. I was wondering if we could work out a way to make this happen. I can be reached at this email  ltbcoxusn@yahoo.comltbcoxusn@yahoo.com or you can also reach me at 919-257-7475 for about the next three weeks. Please let me know if there is something I can do to help you with your mission to provide a toy for all the children in need.
Thank you in advance and I hope to hear from you soon.
Brady B. Cox, MD
LT MC USN
Menu